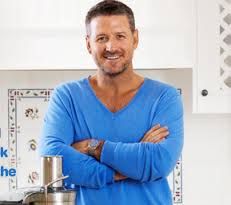 Joe Cross is on a mission.  He first came onto the scene when he taped his journey of a 60-day juice cleanse where he consumed nothing but juices.  He lost 60 pounds and after his movie aired it was just the beginning for him.  He is now helping people who need to revamp their diets and get them on a healthier track to living through juicing.  Check out my interview with him and don’t be afraid to get trying some of his green juices!! They are delicious! Also check out the Fat, Sick and Nearly Dead recipes menu specifically for children.

1. What was your biggest source of motivation while doing your 60-day juice cleanses?

At age 40, I was about as unhealthy as a forty-year-old can get. I was massively overweight (141 kilos/309 lbs) with an excruciatingly painful autoimmune disease called urticaria. Touch me and I puffed up. On a particular day, I could give the Elephant Man a run for his money. Between my weight and my urticaria, it had become just about near impossible for me to do many of the things I most enjoyed in life. I couldn’t pick up my nieces and nephews in my arms to give them a hug, I couldn’t play golf with my Dad, heck I couldn’t even wear a snug-fitting shirt without puffing up with hives. I began to suspect that what I was putting into my body, which was a ton of alcohol and junk food, had caused the disease and the solution might be equally straightforward. If it was true, that you are what you eat, well then I’d better commit to healing my body in the best way I knew I could which meant getting back to the basics and begin to consume the healthy whole foods are bodies are designed to ingest. For me, I was at the end of my line. Eight years on pills and being sick and the greater goal here was I was desperate. This was a real last-ditch attempt for me to get well.

2. What was the best part about your fast? The worst?

It’s hard for me to pinpoint the best part of my Reboot as it resulted in heaps of benefits that I will retain forever – much better food choices, a smaller physique that doesn’t have people asking me when the twins are due and I enjoy exercise. The ability to travel across the United States and meet folks from all walks of life, and other average Joes who were also trying to get a grip on their health was also life-changing. And of course, finally getting off the Prednisone. Really, when I think about it, the end of my Reboot was just the beginning. Once my physical body detoxed during the Reboot process, my mind became astonishingly clearer and I began to plan how I would move forward from there. Would I be able to change the way I lived my life? The Reboot put that choice back in my hands. It returned me to the driver’s seat in control of my lifestyle. The worst part? The first few days. Boy was that hard. I didn’t prepare my body properly; instead, I binged on burgers and milkshakes the night before my first day. Once I started juicing, my body was in such shock from cleansing itself so abruptly that I had awful headaches and felt overly lethargic and anxious. I only wanted to stay in bed away from the outside world. Day three was the worst day by far, but days began to turn brighter from there.

3.  Advice for getting people started in the right direction to becoming a healthier and happier person?

Consuming vegetables, fruits, nuts, beans, and seeds can have a radically positive effect on your health and well-being. The typical American plate is only 5% fruit and veggies. I encourage people to move the dial and increase their consumption of vegetables and fruits. I believe that juicing is a great way to supercharge your body with the incredible nutrients found in whole plant foods – and the volume you’re able to take in when juicing is far more than you would be able to eat.  So it’s a great way to move that dial, and as that happens, your body starts to return to its natural healthy state. You actually begin to crave the good stuff and stop hankering after processed foods. The minute you start to feel well – sincerely well, not the momentary euphoria you might experience as a junk food high – it gets easier and easier to choose whole, natural foods. Now that said, I do believe in moderation and I know that lots of life’s great moments involve foods that aren’t whole plant foods. I reckon that life is to be enjoyed – and I think sometimes that means a piece of wedding cake, or a Thanksgiving dinner with the trimmings, or a glass of champagne at New Year’s. But if your daily life includes lots of fruits, veggies, nuts, beans, and seeds, you can enjoy those occasional indulgences and still maintain your health and vitality. More Information

4. How do you get kids involved in making healthy choices and juices?

We need to expose healthy foods to young children and get them excited about consuming more fruits and vegetables. Educate your children. If they understand that veggies like greens give them added nutrients and will help them learn and do better in school and play better on the soccer field, they might start asking for broccoli at dinner. Making juices and smoothies is a fantastic way to get your kids involved in the kitchen and excited about eating healthy. I know when I crank open my juicer kids come running. They love it! They want to put the carrots, apples, kale through the shoot, it’s just like chopping wood. Let them choose the ingredients of your next juice or smoothie, and let them name it! Rainbow Racecar is a top favorite.

5. How do you get more fruits and vegetables into families’ lives?

Make your visits to the farmer’s market or grocery store a family affair. Let your kids choose the fruits and vegetables. No child is too young to be a sous chef. When you get home invite your kids (and of course your husband and/or wife) into the kitchen to help prepare the vegetables they picked out. Have fun cooking veggies by treating it like a science experiment: try roasting, mashing, and steaming for different textures and discuss how changing the cooking method changes the flavor and texture of each veggie.

6. We here at LTF love green juices and green smoothies. What is your favorite recipe?

My absolute favorite go-to juice – the one that got me through my 60-day Reboot – the Mean Green. It combines the ingredients of: 1 cucumber, 4 celery stalks, 2 apples, 6-8 kale leaves, ½ lemon and a 1 inch piece of ginger. Wash all produce well, peel the lemon (optional), juice, pour over ice and enjoy! Whenever I make the Mean Green I always make enough for two juices. I drink the first batch as soon as it’s juiced and then I store the other half in an air-tight glass container and save it for the next day. But, here’s the trick. I don’t just drink the juice. I still get the amazing nutrients from the Mean Green but I change it up and make it into a smoothie. I add the leftover juice into my Breville blender, then add a frozen banana and 1 cup of almond milk. Blend it up and there you have it, a Mean Green Smoothie!

7. You have had such success with your documentary; spreading a wellness message with Reboot, work with William Sonoma and more. What is next?

We’re currently celebrating the 2nd anniversary of Fat, Sick & Nearly Dead’s release in the US, and it’s amazing to reflect back on how much can happen in 24 months. The film has now been seen by almost 6 million people worldwide. We’ve built a robust online community at www.rebootwithjoe.com that is providing information, Fat, Sick and Nearly Dead recipes, juicing and eating plans, support and entertainment to hundreds of thousands of people who want to reclaim their health and vitality as Phil and I did in the movie. We’ve produced The Joe Show, a series of webisodes on juicing and wellness. I’m in the process of finishing up my second film, which will be released this fall. And I’m hitting the road to take Fat, Sick & Nearly Dead and the Reboot message to Canada, Europe, Russia, China and southeast Asia. So it’s been a busy two years! But the most exciting thing is that every single day I get emails from people who are losing weight, getting off medication and feeling happier because they are Rebooting – and that gets me excited to keep spreading our message.

Thank you Joe!! We wish you the best, and keep on juicing!!

Joe just released: The Kid’s Menu Check it our for great ideas for healthy foods for children.