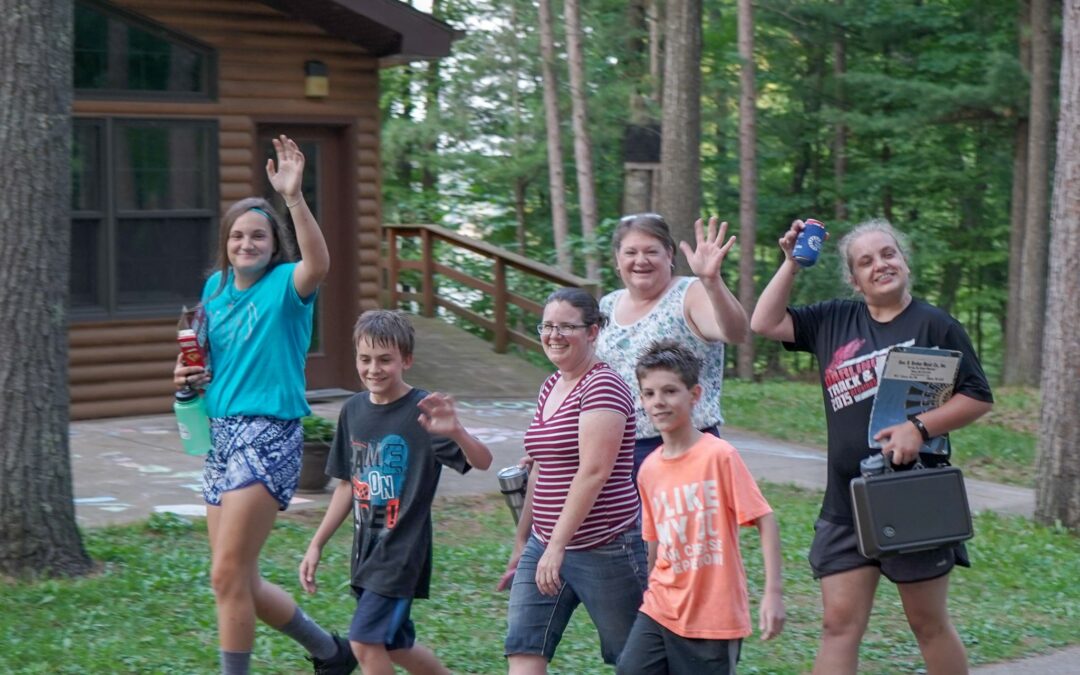 When Nicole Jenne’s youngest son, Matthew, was nine months old, a pediatrician told her that he needed to see a doctor for the brown spots scattered across his skin.

The spots had never concerned Nicole. She had them too, and so did her oldest son.

“We just called them the mommy marks,” she recalls with a smile.

A doctor’s visit confirmed that the “mommy marks” were actually café au lait spots, and they weren’t the only thing that ran in the family. Matthew, along with Nicole, her oldest son, and her mother were all diagnosed with neurofibromatosis.

Nicole, a Minnesotan mother of three, lights up when she talks about her boys, Jaiden, 17; Eli, 15; and Matthew, 14. She brags about Eli making the varsity hockey team as a 9th grader and does a funny impression of Matthew’s toothy smile.

She’s raised them on her own.

Soon after Matthew’s first birthday, Nicole’s husband left, taking all of their savings with him.

When Matthew was diagnosed with NF, Nicole had stopped working in order to take care of him. Now, she’d need to be her family’s sole provider.

“I was left trying to raise the kids, trying to deal with a brand new medical diagnosis, and trying to make sure that we had a place to live,” she says.

While Nicole worked to keep her family afloat, Matthew began having violent vomiting episodes. He’d throw up every three minutes for days on end. Hot weather only made it worse, so on warm, sunny days, Matthew was often stuck inside.

“You had to weigh the pros and cons of going outside to play in the summer,” Nicole explains. “Is it worth ending up in the hospital?” 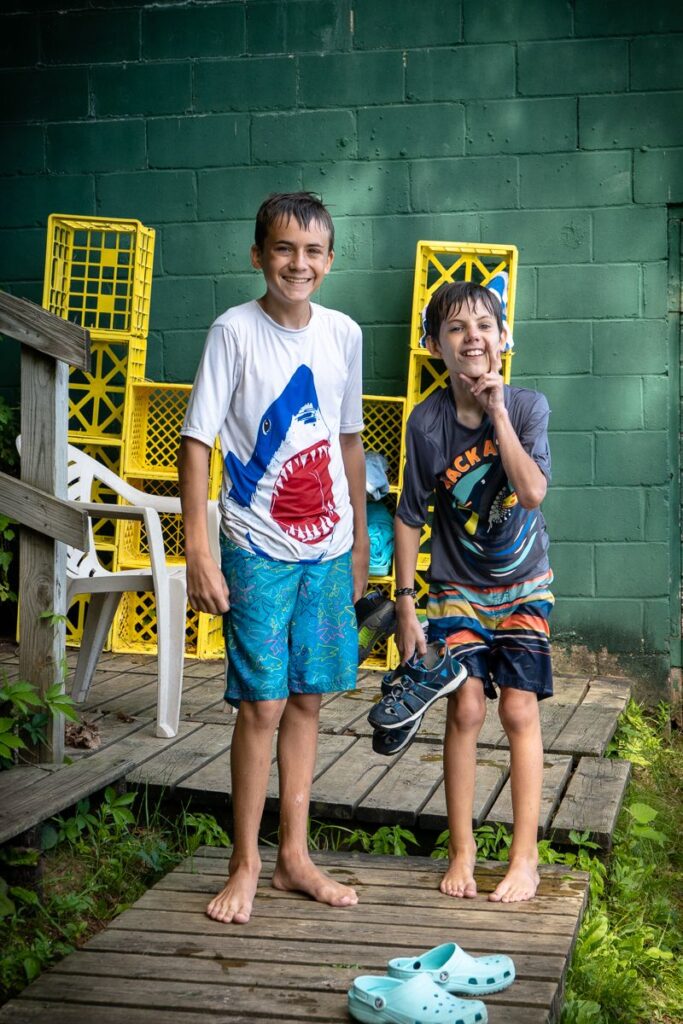 Matthew and Jaiden at the 2019 NF Family Wellness Retreat

At age three, he was diagnosed with cyclic vomiting syndrome. Nicole wasn’t sure the diagnosis was accurate. Matthew’s symptoms seemed to indicate a larger issue. The vomiting was accompanied by involuntary urination and periods of memory loss where Matthew would forget about his entire episode.

Despite Nicole’s insistence that Matthew was experiencing something else, every doctor diagnosed him with cyclic vomiting syndrome. As she watched her son suffer with seemingly no reprieve in sight, Nicole grew frustrated with the doctor’s lack of action.

“After years, you’d think they would try to get down to the bottom of it,” she says.

When Matthew was ten, he went to the hospital with continuous vomiting and an odd heart rate. A few days into his stay, with doctors to bear witness, Matthew had a seizure. He was transferred to another hospital, where he had a full-blown grand mal seizure that lasted for over 25 minutes.

When the seizure ended, Matthew didn’t wake up. Nicole was sure he’d come to soon, but as the hours passed, she grew terrified. She asked a doctor if he’d wake up, but their answer only worried her more. “He should,” they replied.

18 hours passed before Matthew woke up. His two seizures had been 24 hours apart, which fit the criteria for epilepsy. So did the vomiting episodes, a common sign that a seizure is about to occur. Matthew had likely been having dozens of seizures throughout the day, for years. At long last, Matthew received a diagnosis of epilepsy secondary to neurofibromatosis.

Epilepsy occurs in about 4 to 7% of patients with NF1, according to the Epilepsy Foundation. That’s double the rate of the general population.

Nicole still wonders why it took a grand mal seizure for doctors to recognize that Matthew has epilepsy. She questions whether Matthew would still be suffering every day with a misdiagnosis had he not had those seizures. She doesn’t like to dwell on it for too long.

Matthew’s new neurologist is working to prevent another child from years of hardship. She shares Matthew’s story at conferences across the country, encouraging neurologists to consider that their NF patients with supposed cyclic vomiting syndrome might actually be having seizures.

Matthew has been taking epilepsy medication, Keppra, for four years now. It changed his life. He no longer has vomiting fits, and his seizures are at a minimum. He can focus on managing his NF and going to school. He can play outside on hot summer days, and he does so every year at the NF Family Wellness Retreat.

The family has found healing at the retreat in different ways.

For Nicole, having a space to process her feelings with other NF families has been powerful. It’s helped her come to terms with having PTSD from Matthew’s frightening hospitalization. She’s also been able to talk with other parents about the symptoms their children presented at different ages. Many dealt with the same struggles as Matthew did, like delays in learning to sit up, walk, and crawl, and a current learning or developmental disability. 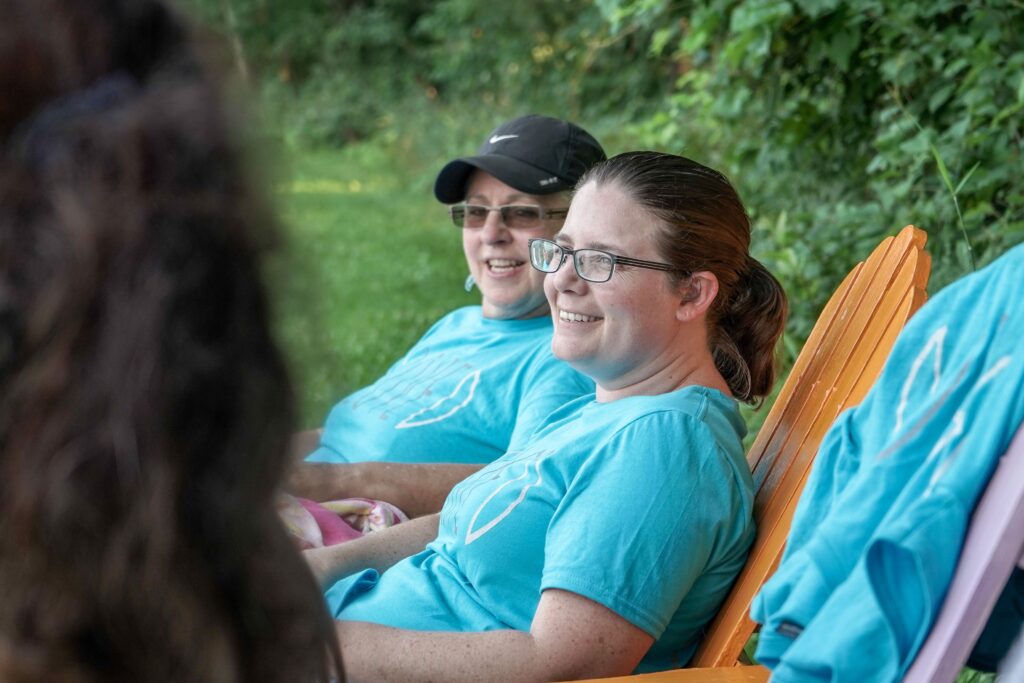 Nicole says it made her realize how important it is for doctors to hear these stories and be able to recognize these symptoms.

“The earlier these kids can get help for their delays, the better off they are for their future,” Nicole declares.

For Matthew and his brothers, the retreat is their happy place. Nicole described it as a safe space where they can just be themselves and feel appreciated for who they are. For most of the retreat, she only sees glimpses of them, running around with friends with big smiles on their faces.

“My kids get there, and the car is barely in park before the doors fly open,” Nicole laughs. “They get really mad at me because I have to line them up against the fence and take a picture in the same place every time to see how much they’ve grown.”

As a single mom, Nicole has little money to spare for family vacations. The retreat, which is free of charge, is their family’s one yearly trip, and they spend all year looking forward to it. When Nicole explained to the boys that she’d need to save money in order to cover gas expenses, they decided to start saving up themselves.

From the minute they get home from the retreat, they begin collecting change in a jar to fund next year’s trip. Nicole and her mom add all of their loose change to the jar, too. With the money they save, they can pay for gas as well as a stop at Crystal Cave and a night at a hotel with a pool for the boys to swim in before arriving at the retreat the next day.

Their tradition inspired our Joy Jar fundraiser, which works to keep the retreat free for all NF families to enjoy.

Whether it’s collecting change in a jar or sleeping at the hospital as a family while Matthew receives medical attention, Nicole and her sons are in it together. They’re a testament to the collective strength of NF families and the incredible support that exists within the NF community.