Family matters with the Palumbos 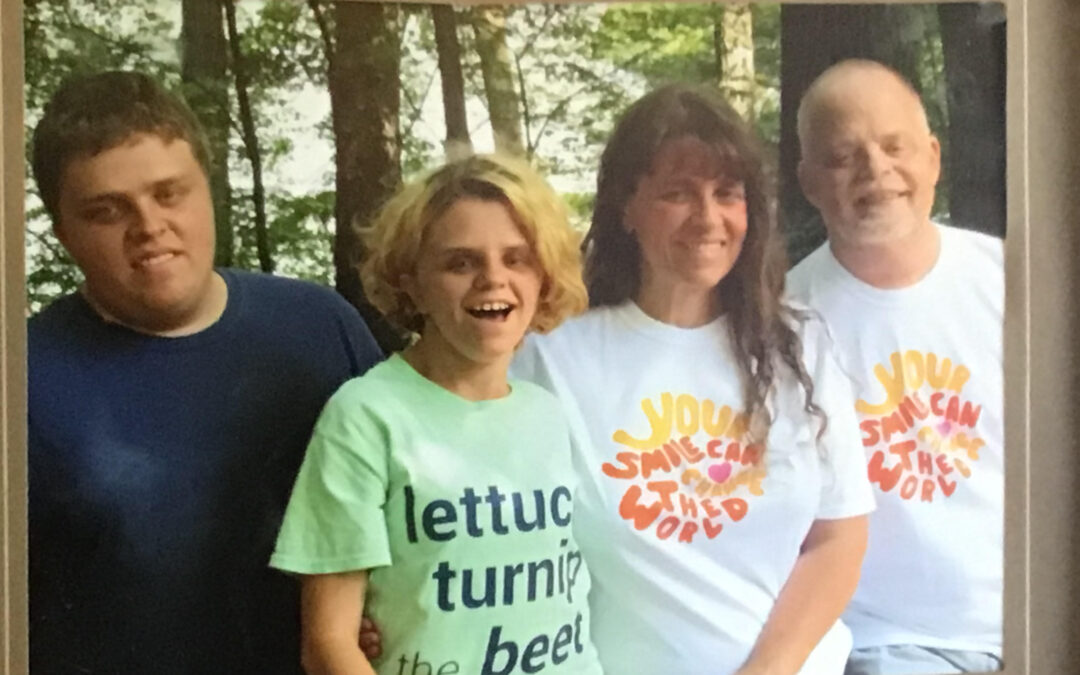 From the time he was born, Michael Palumbo has been in and out of the hospital.

When he was nine years old, he had to have his leg amputated due to pseudarthrosis, a tibial fracture that failed to heal properly. At 23, he had two bypasses to redirect blood flow around a blockage in his renal arteries that was causing high blood pressure. In adulthood, Michael has powered through two bouts of cancer and is currently awaiting a new kidney to replace his failing one, which is functioning at only 10%.

The idea that his symptoms were connected didn’t cross his mind until he was 32 and bringing his six-year-old daughter, Samantha, to Children’s Wisconsin, a pediatric hospital in Milwaukee.

Samantha had scoliosis, and her curvature was pressing on her heart. Her pediatrician suspected that neurofibromatosis was the culprit. Scoliosis is the most common skeletal deformity among NF1 patients and often appears in early childhood. Mike had never heard of NF before, but it was about to become his life. In the span of one day, Mike, Samantha, and Mike’s son Tyler, then four, were all diagnosed with NF.

“It explained a lot of things,” says Mike of his late diagnosis. “Once we started reading about what NF was and what it could do, it answered a lot of questions.”

Flash forward two decades, and Mike is an NF expert. So are Samantha and Tyler, now 26 and 24 respectively, and Mike’s wife, Stacey, the only one in the family without NF. Together, the Palumbos have navigated life with NF in their hometown of Kenosha, Wisconsin. It’s been a long journey full of ups and downs.

Like her dad, Samantha’s NF manifestations have been largely physical. A month after her diagnosis, she underwent surgery for her scoliosis. Doctors placed a rod along the upper portion of her spine to help control her growth and relieve the pressure her curvature was putting on her heart. Five years later when Samantha began experiencing scoliosis in her lower back, they went back in, replacing the rod with another that ran the full length of her spine.

Because Samantha was still growing, the rod would need to be turned periodically. From ages 11 to 14, Samantha had surgery every six months, where the doctors would rotate the rod to allow for growth. When Samantha finally stood at a permanent 4’7”, the rod was fused to her spine, where it will remain for the rest of her life.

Through it all, Samantha remained driven and upbeat. After graduating high school, she attended White Water College in White Water, Wisconsin. Every weekend, Mike or Stacey would make the hour-long trek to bring their daughter home to visit. Unable to see over the steering wheel or turn her head fully on one side due to her spinal rod, Samantha wouldn’t learn to drive until she was 26 and had saved up enough to buy a car furnished with accommodations. Today, Samantha is living from home and monitoring an optic glioma and the chronic migraines that come with it. 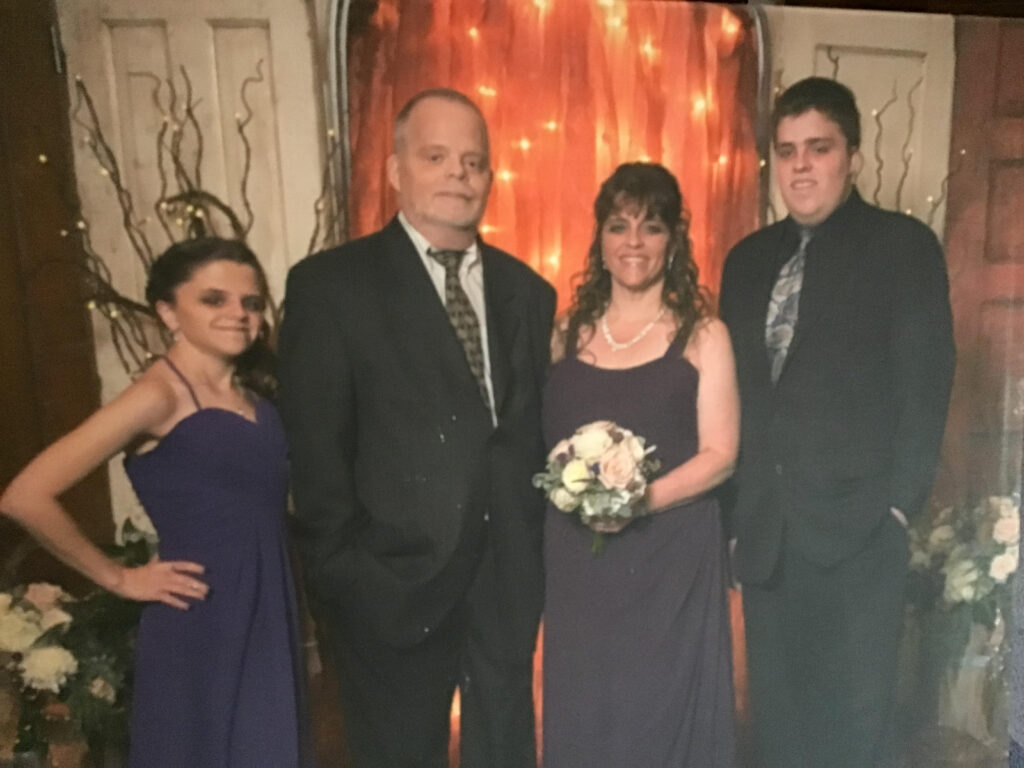 Tyler’s NF looks different than his sister’s. Over six feet tall, he towers over Samantha. Few people would fathom that Tyler is the youngest sibling. While he managed to avoid most of the physical manifestations of NF, Tyler has a range of NF-related social issues, including attention deficit disorder (ADD) and autism. They made it harder for Tyler to focus in school and make friends. His middle school years were riddled with harsh learning curves and intense bullying.

“Let’s put it this way,” Mike says with a sigh. “We had Tyler’s school on speed dial.”

In class, Tyler rushed through his work and often misplaced homework assignments. After noticing that Tyler was struggling to remain focused and organized, Stacey approached his teachers about developing a learning plan. After much back and forth, Tyler got on a 504 plan and teachers began checking in with him at the end of each school day to make sure he had what he needed and knew how to study.

One thing the 504 plan didn’t address was the daily harassment Tyler was putting up with. One day at lunch, a group of kids bashed his head on the lunch table. On a bus ride to school, a boy threatened Tyler’s life. By eighth grade, the police had gotten involved and the Palumbos decided to pull Tyler out of school and teach him themselves. Stacey recalls this period with sadness and frustration- for the pain Tyler endured, and the way it set back his learning.

“Homeschool with a child that is easily distracted doesn’t work real well but we did our best,” Stacey reflects.

Everything changed when Tyler entered high school. With nervous courage, he stepped back into the classroom, this time attending a tiny charter school with only 149 kids per grade. The school’s principal was kind and proactive about watching over Tyler. After just one stint of bullying in the first weeks of ninth grade, she shut it down, and Tyler was never bothered again.

In a big presentation in front of teachers and family his junior year, Tyler proudly displayed the best grades he’d ever gotten. One teacher asked Tyler why he’d been doing so much better in school. Tyler replied, “Because I don’t have to look over my shoulder and be afraid anymore.”

“For a kid who has trouble expressing to come up with that, it was just life-changing,” she says.

Tyler has remained on the path to success. After high school, he attended Carthage College in Kenosha, graduating in May of 2020.

While the Palumbos are proud of how far they’ve come in learning about and addressing NF, they can’t help but question where they’d be today if neurofibromatosis was more widely understood. 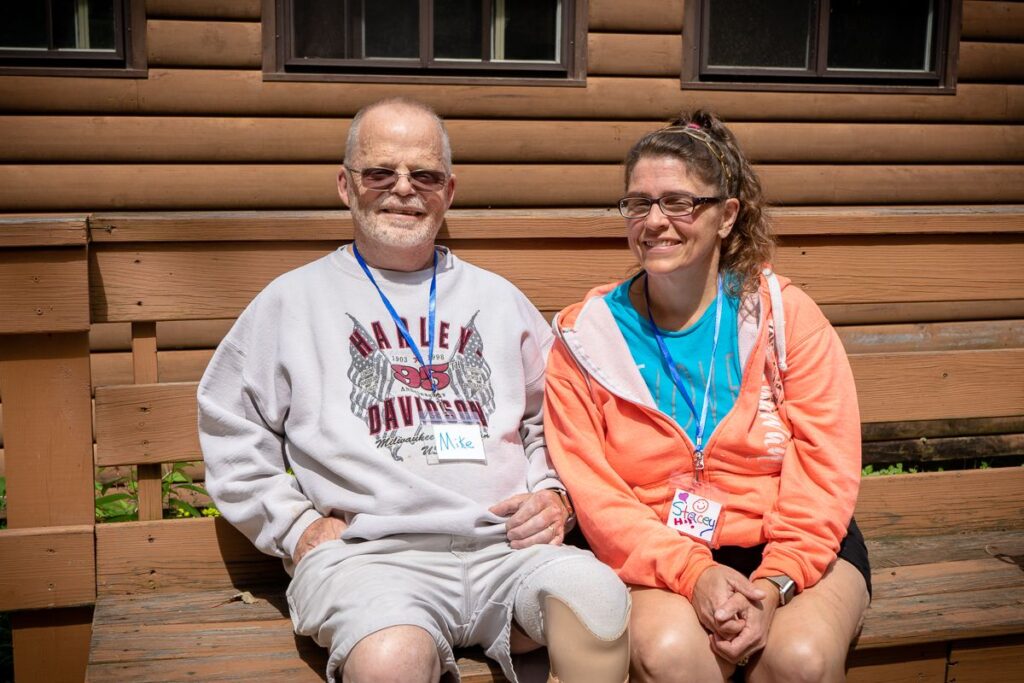 Mike and Stacey at the 2019 NF Family Wellness Retreat

Mike visits a teaching hospital, where he has a new doctor nearly every visit. He’s memorized the spiel he must give to bring every doctor up to date on his medical history.

“My first question is are you familiar with neurofibromatosis?” Mike recounts. “One doctor said, ‘Oh yeah, I remember we had a seminar on that.’ That’s all they get.”

The lack of awareness within the medical field has made every diagnosis and treatment unreasonably challenging. When Tyler was experiencing learning difficulties, Mike and Stacey practically had to beg doctors to take him seriously. They’d bring them pamphlets, explaining how Tyler’s symptoms aligned with ADD, which is extremely common among people with NF. The doctors weren’t hearing it.

“Doctors would say, ‘Oh no, he just needs to slow down, he’s just not trying,’” Stacey remembers with anger in her voice. “Unfortunately, us as parents kind of fell for that, like ok, let’s have him try harder. In actuality, it really would have been a help to Tyler had they put services or somewhat of a plan together to help him.”

It would take countless visits to the doctor for Tyler to finally receive his diagnosis.

Since the pandemic began and Mike started experiencing kidney issues, Stacey has picked up his medications for him to avoid potentially dangerous exposure. On a recent pharmacy run, Stacey picked up a new medication for his urinary tract. Before leaving, she did what she always does and what Mike has coached her to do: ask the pharmacist if the medication will have any effect on his kidney or NF.

The pharmacist hesitated, so Stacey called his doctor.

“Sure enough, they ended up giving him a different medicine,” Stacey says. “Had he taken that medicine, it could have been really bad. Thank goodness Mike thinks enough to have me ask these questions.”

“That’s being proactive!” Mike chimes in.

Sometimes, the Palumbos wish they could go back to the initial diagnosis, equipped with the information they have today. Stacey’s biggest regret is not learning about the programs and services that were available for Samantha and Tyler sooner. In the midst of doctor’s visits and surgeries, figuring out how Samantha would learn to drive or whether she could play sports was the last thing on Stacey’s mind.

“When you’re dealing with NF, it’s just not something that you end up thinking about,” Stacey explains. “It would just be nice to have someone sit down and say, ‘This is what is available to you, this is what you can do.’”

She hopes that other NF families can access these opportunities sooner.

At the NF Family Wellness Retreat, the Palumbos have spread that message far and wide. As the family with the oldest kids, they’ve been able to reassure and educate younger NF families about what to expect and how to advocate for their kids.

“We lean on each other. We share stories. We tell everyone that everything will be ok,” Mike says. 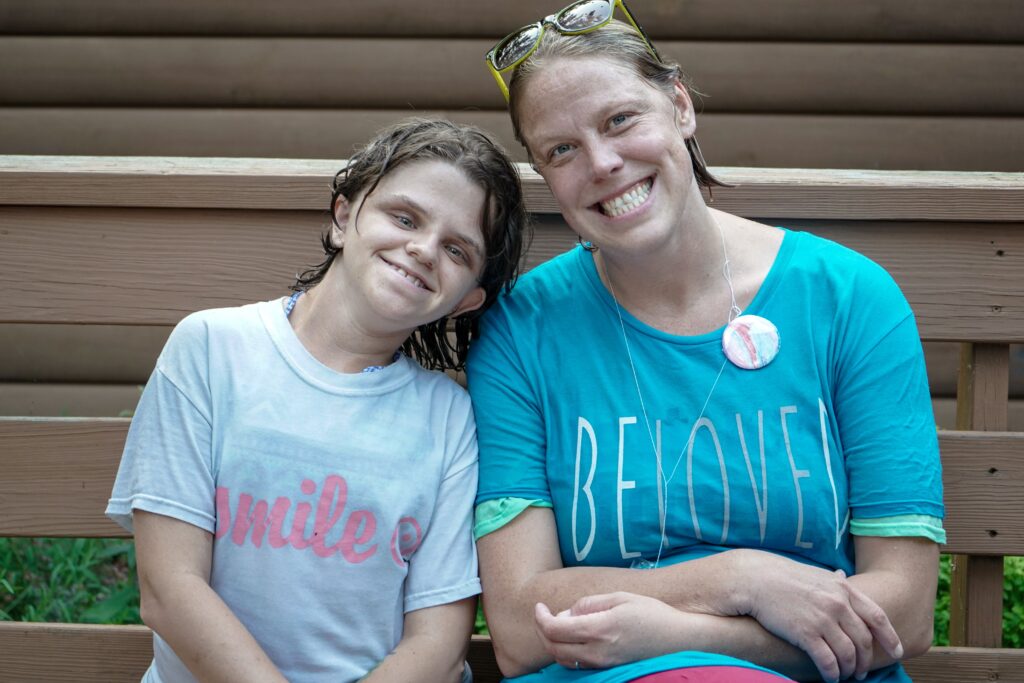 For the kids, the retreat is a safe place to connect with others like them. For those with NF, it’s a unique environment where they don’t feel different or alone, Mike explains. And for siblings of kids with NF, they’re able to find common ground with kids who understand what they’re living amidst.

The Palumbos have stayed in touch with many of the families they’ve met at the Retreat. Despite COVID disrupting last summer’s meetup, one of Samantha’s friends came to stay with them in their summer trailer, stationed just down the road from Imago Dei Village. They’ll be back in Clintonville this summer for the long-awaited 2022 NF Family Wellness Retreat, where they hope to meet more families to help out.

When asked for one piece of advice he’d give to someone newly diagnosed with NF, Mike quickly says, “Don’t go on the internet! And be vigilant with your health. If something is going on and you’re not getting the answers you need, go see another doctor.”

Stacey wants caretakers of people with NF to know that even if they don’t have NF themselves, the struggles and fears they face are still valid.

“I think on my end because I do not have NF, it kind of carried its own weight, almost a little like guilt, like everyone else is fighting this huge fight,” Stacey explains thoughtfully. “In the beginning, I was like, ‘Did I do something during my pregnancy? Was this [caused by] something I didn’t do?’ Now, needing to be there for Mike, for the grocery shopping and cleaning and laundry and working my job, it comes with its own stressors. But I am so thankful that my health is at the place it’s at.”

“I think you should be commended for what you do,” Mike says, smiling at Stacey. And then, “I think NF families are closer.”